What is Snapchat Plus? - DAVID RAUDALES

Home David Raudales What is Snapchat Plus? Snapchat doesn’t get as much media coverage as TikTok nowadays, but it is still beloved by Generations Z and Alpha. We showed in our Snapchat Statistics and Revenue post that as of Q4 2020, the app had approximately 265 million daily active users. By Q1 2022, this had risen to 332 million daily active users worldwide. Piper Sandler’s 43rd semi-annual Generation Z survey of 7,100 U.S. teens in Spring 2022 would have sent some alarm bells to Snap headquarters, however. It announced that TikTok was now the favorite social media platform (33% share), surpassing Snapchat for the first time (31%), with Instagram third (22%). Nevertheless, Snapchat recognizes it must innovate to survive, and perhaps Snapchat Plus might be the way forward.

What is Snapchat Plus, and How Does it Work?:

What is Snapchat Plus?

As its name indicates, Snapchat Plus (aka Snapchat+) is a paid, enhanced version of the social messaging app. Snapchat is gradually rolling out Snapchat Plus to iPhone and Android users in the United States, Canada, the United Kingdom, France, Germany, Australia, New Zealand, Saudi Arabia, and the United Arab Emirates (at launch). Snapchat promises to expand to more countries over time.

Snapchat describes the enhancement as “Snapchat+, a collection of exclusive, experimental, and pre-release features available in Snapchat for $3.99/month.” They believe that Snapchat+ will allow them to deliver new Snapchat features to some of the most passionate members of their community and will enable them to provide prioritized support. Jacob Andreou, Snapchat’s SVP of product, said that Snapchat’s new premium account targets users who “spend most of their time communicating with their closest friends on Snap.”

Additional Features of Snapchat Plus

The extra features offered by Snapchat Plus are more evolutionary than revolutionary. They are designed to make it easier for Snapchat’s most avid users. The current “exclusive features” are: 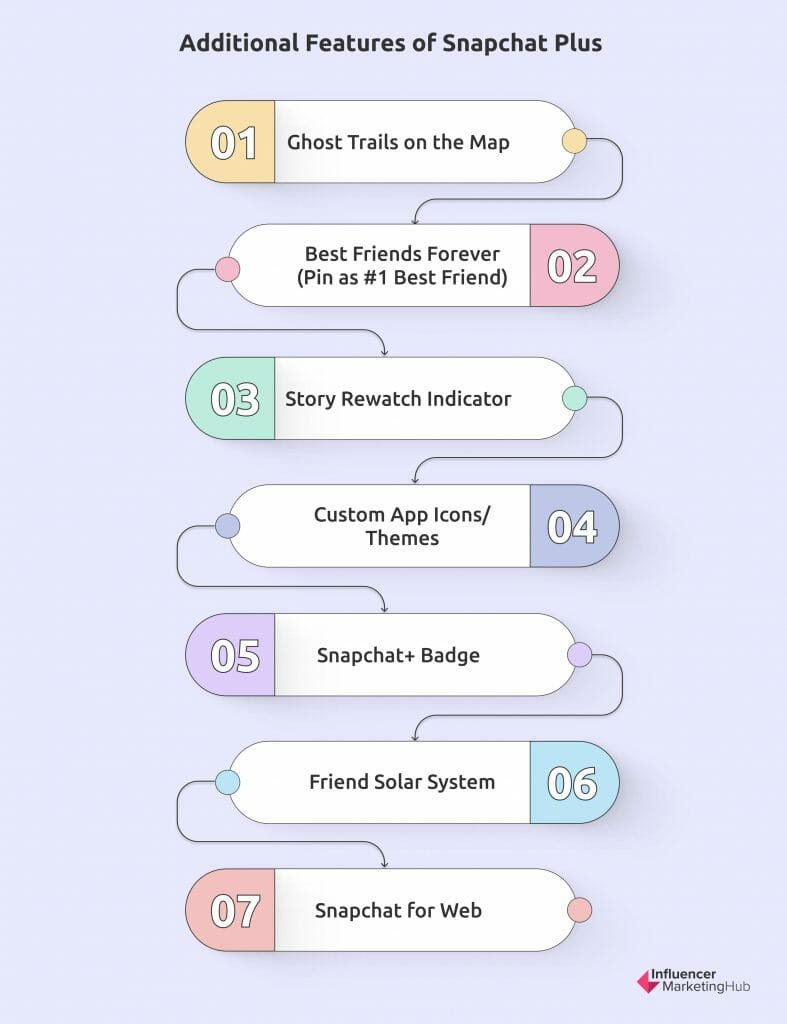 This feature list will change over time as Snapchat decides to try out new experimental and pre-release features. However, by paying a relatively small monthly subscription, Snapchat’s “superfans” will have the first chance to play with the app’s new features before the average user sees the changes.

According to Andreou, “single-playerish” features (those only involving the user, not affecting anyone else) will probably stay exclusive to Plus members, but features that involve interacting with other users will eventually go public.

1. Ghost Trails on the Map

Ghost Trails allows you to see where those of your friends who share their location with you have been in the last 24 hours. You can only see Ghost Trails for friends on the Map if they have made their location visible to you (location-sharing on the Snap Map is optional for all Snapchatters) and they have access to Snapchat+ in their country.

To see a friend’s Ghost Trail, tap on their Bitmoji on the Map.

If you want to clear your Ghost Trail, toggle Ghost Mode on, then off in your Snap Map Settings. You can temporarily share your live location with friends, and your Ghost Trail will be visible only to those you share it with.

Ghost Trails may be a disincentive to subscribe to Snapchat Plus for some people, however. As TechRadar has warned, while the Snap Map can have benefits, such as looking at Stories from places you’re about to visit for a vacation, Ghost Trails goes one step further. It places a yellow line by your friends, showing where they’ve been in the last 24 hours. You are effectively spying on where your friends or partners have been. Sure, they can adjust their settings to make themselves invisible, but by doing so, they are effectively removing any benefit from having Ghost Trails, and you may have embarrassing conversations about why they have disappeared from view.

From Chat or the Send To screen, press and hold on your friend, then tap ‘Pin as your #1 Best Friend.’ And don’t worry about upsetting your other friends – only you can view this pin.

You can see how many friends rewatch Snaps you post to My Story, Private Stories, or Shared Stories. To see if anyone has rewatched a Story you’ve posted, tap on it, then swipe up.

You can toggle the Rewatch Indicator on/of by going to your Profile, then tapping your Snapchat+ membership card at the top. You can then toggle ‘Story Rewatch Count’ on or off.

This isn’t the most exciting of features, but at least it can help you feel special. The average Snapchatter has the standard white ghost on a yellow background app icon on their device screen – just like everybody else. However, those who have subscribed to Snapchat Plus can select from nearly 40 possible icons.

To do this, go to your Profile, tap your Snapchat+ membership card at the top, tap ‘App Icon,’ and choose any app icon you’d like from the selection.

Another cosmetic feature, albeit one that other people can see, is that as a Snapchat+ subscriber, you can add some flair to your display name with a black star badge ✪

This lets your friends know you’re a Snapchat+ subscriber. The badge is off by default, but you can make it appear next to your display name by going to your Profile, tapping your Snapchat+ membership card at the top, and then toggling on ‘Snapchat+ Badge.’

All your friends should be able to see your badge as long as they use an updated app version.

Snapchat+ subscribers can see a ‘Best Friends’ or ‘Friends’ badge with a gold ring around it on someone’s Friendship Profile. Despite the usual meaning of the word “best,” on Snapchat Plus ‘Best Friends’ means, you’re one of each other’s eight closest friends, and ‘Friends’ means you’re one of their eight closest friends, but they’re not one of yours. To view Friend Solar Systems, both you and your friend must have a linked Bitmoji.

If you tap on the badge, a panel will pop up telling you which planet you are in your friend’s Solar System, with each planet representing a different position in their Best Friends list. So, for example, if your friend is the Sun and you’re Earth in their Solar System, they consider you their third closest friend.

Undoubtedly this feature will eventually become available for everybody. Still, for the moment, Snapchat for Web is limited to Snapchat+ subscribers in the United States, United Kingdom, Canada, and Snapchatters across Australia and New Zealand.

You can use Chrome to start a call or pick up where chats left off on mobile. Snapchat for Web includes messaging features like Chat Reactions and Chat Reply, and Snapchat will soon roll out Lenses.

Obviously, you have to live in one of the supported territories to sign up for Snapchat Plus. If you don’t, you will have to wait until they expand the service to your country.

Once you’ve finished the subscription process, Snapchat will bring up a screen explaining the main features of Snapchat Plus. In most cases, it allows you to turn each one on or off. One of the advantages of Snapchat Plus is its flexibility. It doesn’t require you to have everything “all or nothing.” You can pick and choose the features you want, and you presumably will be able to do the same for any new features that Snapchat adds later.

Ultimately, if you don’t want to continue with Snapchat Plus, you can cancel your subscription by tapping the gear icon in the top-right and then “Snapchat+.” Next, tap “Manage your Subscription” to open the page where you cancel. You will, however, have to use the same device you used to sign up.

While Snapchat Plus is the most talked-about update to Snapchat in 2022, there have been a few other changes. How to Scale Enterprise Influencer Marketing