The State of Influencer Marketing in the Beauty Industry - DAVID RAUDALES

Beauty is one of the leading sectors to have embraced influencer marketing. One of the main reasons for this is that beauty is incredibly visual, and influencer marketing (and, indeed, social selling) works best in a visual medium. Therefore, it shouldn’t be surprising that Instagram is the social platform where you find most beauty influencers. However, you will also discover many beauty influencers who love sharing videos across YouTube and, to a lesser extent, TikTok.

In this post, we look at the state of influencer marketing in the beauty industry, with particular reference to a study conducted by our partner, Upfluence.

The State of Influencer Marketing in the Beauty Industry:

Although There Are Fewer Beauty Influencers on TikTok, They Have the Most Followers on Average

As we have seen, there are considerably fewer beauty influencers on TikTok than on Instagram or YouTube. However, the TikTok influencers have the highest average follower numbers.

The U.S. Has More Beauty Influencer Followers Than Anywhere Else

Upfluence broke down beauty influencer follower numbers by location (although they only showed results for the U.S., UK, Canada, France, and Brazil.) It’s important to remember that you can’t access Instagram, YouTube, and TikTok in some countries, including China. TikTok is also now banned in India, and Instagram is banned in Russia. 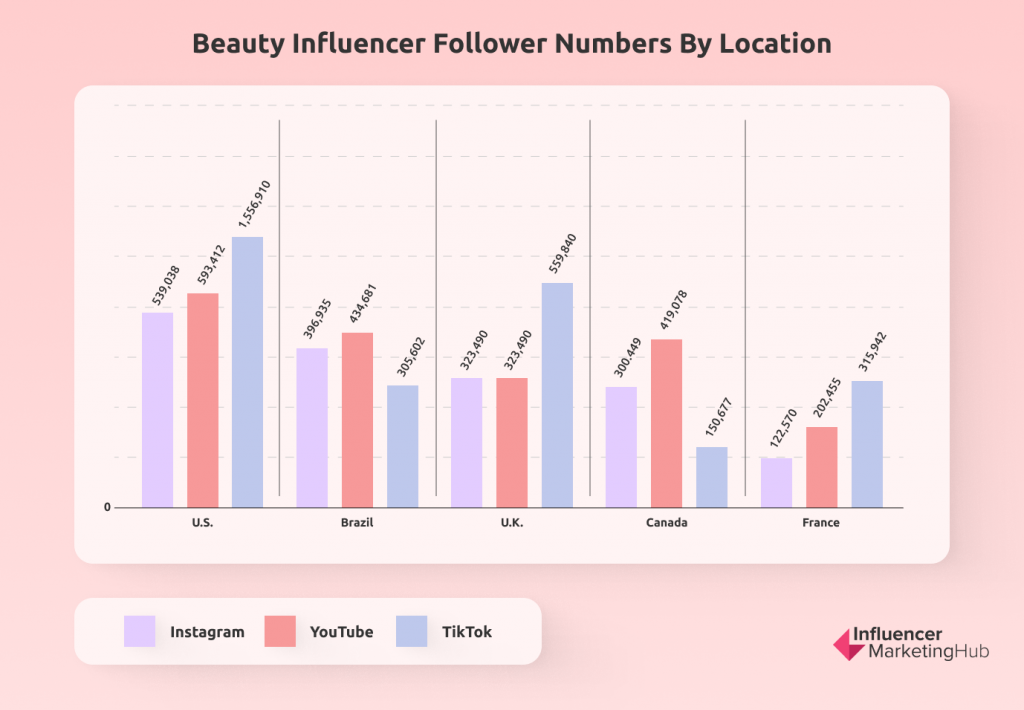 Beauty influencers in the U.S. average 539,038 followers on Instagram, 593,412 on YouTube, and 1,556,910 on TikTok. Clearly, former President Trump would have upset many fans of beauty influencers if he had carried out his threat to ban TikTok from the U.S.

Brazil averages 396,935 beauty influencer followers on Instagram, 434,681 on YouTube, and 305,602 on TikTok. Overall, this shows a considerably different profile to the U.S., with TikTok much less used in the Latin nation in particular.

These figures are interesting when you compare them with the percentage of adult internet users in these countries who follow all types of influencers. According to the July 2022 Global State of Digital Report, 41.1% of Brazilians claim following influencers as a main reason for using social media, as do 21.0% from the U.S., 20.0% from France, 19.5% from Canada, and 18.3% from the U.K.

TikTok Has by Far the Highest Engagement Rate for Beauty Influencers

There may not be as many beauty influencers on TikTok as on Instagram or YouTube. Still, the TikTokers have considerably higher engagement with their followers than those on the other platforms. Is this an indication of the intensity of interest on TikTok compared to more traditional social apps?

The average engagement rate for beauty influencers on TikTok is 7.52%, compared to 1.87% for those on Instagram and a mere 0.56% for YouTube beauty influencers. Is this a sign that YouTube is the younger generation’s television, where people passively watch their favorite beauty “programs” and participate less?

Engagement on TikTok varied markedly, however. For example, Canadian beauty influencers had an incredible 17% engagement rate, followed by France (10%, and disproving that language differences always matter on TikTok), the U.S. (9.1%), the U.K. (6.2%), and Brazil (4.1%).

The U.S. Has by Far the Highest Audience for Instagram Beauty Influencers

With Instagram being a US-based Meta-owned social network, it is probably not surprising that nearly a third (32%) of followers of Instagram beauty influences come from the USA. This dwarfs the other counties that Upfluence highlighted in their report: Brazil (11%), the United Kingdom (4%), Canada (3%), and France (3%).

This is probably the least surprising finding from Upfluence’s research. Most followers (82%) of Instagram beauty influencers are female, with only 18% male.

Nearly Half of Instagram Beauty Influencer Followers are Aged 25-34

We have noticed for some time that the average Facebook user has aged with the growth of that platform. People who set up Facebook accounts in the early days of the social network still have them, while their kids prefer something out of their parents’ view. It appears we may be beginning to see a similar trend on Instagram.

An incredible 49% of all followers of beauty influencers on Instagram are aged 25-34, with 34% aged 18-24. However, only 10% of followers are aged 0-17, suggesting that Instagram is less popular than it used to be with today’s teenagers (or this group hasn’t yet developed an interest in beauty).

Interestingly, despite the most significant number of followers being aged 25-34, only 7% are aged 35-54. So, will this cohort even take to Instagram for their social needs, or have they missed taking an interest in the image-sharing app forever?

Beauty Micro-Influencers Have the Best Engagement Rates on Instagram

This is another case where the results for beauty influencers roughly mirror those for the population as a whole (just slightly higher at most levels). The general rule on Instagram is that the larger the influencer, the lower the engagement rate.

However, there isn’t as obvious a pattern with beauty influencers as the general population, and confusingly Upfluence uses different terminology from what we usually see. For example, it defines Micro-influencers as having <15K followers (these are often referred to as Nano-influencers elsewhere) and has a category it calls Regular influencers (15K-50K). In addition, Upfluence describes influencers with 50K-100K as Rising, those with 100K-500K Mid-Size, 500K-1M Macro, and >1M followers Mega. 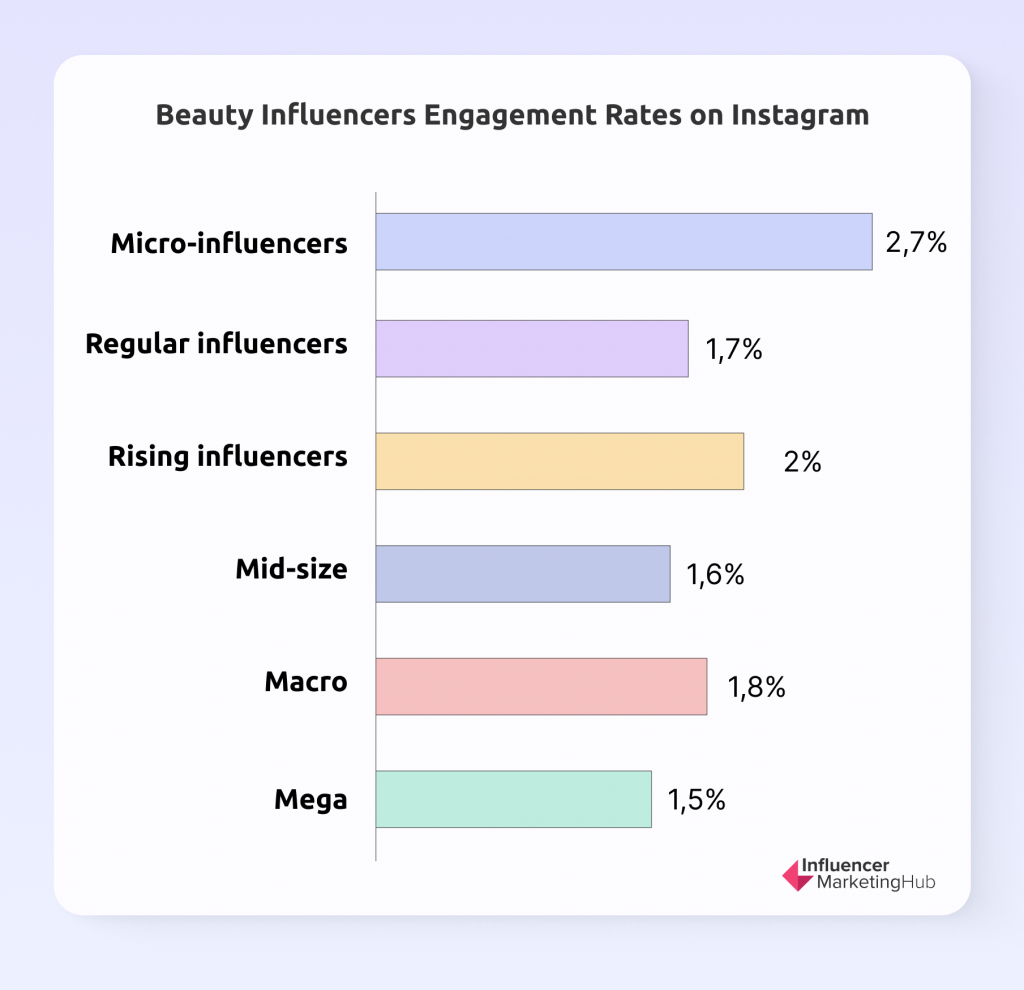 According to Upfluence’s report focusing on beauty influencers, Micro-influencers have an average engagement rate of 2.7%, Regular influencers at 1.7%, Rising influencers at 2%, Mid-size at 1.6%, Macro at 1.8%, and Mega at 1.5%.

Male Beauty Influencers Have Higher Engagement on Instagram, as do Older Influencers

When you break down the average engagement rate by influencers’ gender across the five nations analyzed by Upfluence, you can see exceptionally high engagement with male influencers in Brazil (6.3%) and Canada (4.2%). However, this isn’t consistent for all male influencers, with French male beauty influencers only receiving 0.4% engagement, far smaller than any female cohort.

YouTube Beauty Influencers Have Views Proportional to their Follower Size, Except for Micro-Influencers

On the surface, you might think that the most crucial statistic relating to average views of videos created by beauty influencers is that mega-influencers have dramatically more average views (518,560) than anybody else. But when you think about it, this is pure logic. Mega-influencers have at least 1 million followers by Upfluence’s definition, so that statistic merely tells us that about half of their followers watch each video they release.

However, looking at the views for beauty micro-influencers on YouTube gets interesting. Remember, Upfluence defines micro-influencers as having fewer than 15,000 followers. Yet they break the pattern and average 88,301 views per video. In other words, a typical micro-influencer (if we use follower numbers from the upper end of the range) averages nearly six views per follower. So you’d think they might almost not want too many viewers to follow them and turn them into lower-performing Regular Influencers.

YouTube, as a platform, is more popular with males than females overall. This trend also shows in statistics relating to beauty influencers on the platform, where average viewing figures by gender are almost identical, with an average of 107,065 female views per video and 106,423 views by males.

When it comes to the average number of likes for beauty influencer videos on TikTok, things are very much proportional to size. Mega-influencers average 218,915 likes on their videos, Macro-influencers 47,917, Mid-size influencers 30,739, Rising Stars 12,986, Regular influencers 8,838, and Micro-influencers 4,289. Notably, beauty micro-influencers don’t get the massive engagement boost of their YouTube counterparts.

Unlike YouTube, there is a notable difference between average likes by the genders on TikTok beauty influencer posts. Females average 46,027 likes per post, compared to just 25,397 likes from males.

Upfluence analyzed the hashtags used on posts made by beauty influencers on the three platforms. #makeup came top on Instagram and YouTube and was third on TikTok. The more generic #foryou and #fyp beat #makeup on TikTok.

Although many of the hashtags used by beauty influencers on the platforms (particularly TikTok) were relatively generic, they used more targeted keywords in their posts.

The most popular keywords used on YouTube by their beauty influencers were hair, makeup, haul, skincare, summer, skin, routine, try, and tutorial.

Kylie Cosmetics is the Most Popular Beauty Brand on Instagram

Of course, remember all we have seen above about how influencers with higher follower numbers tend to have lower engagement than their less followed/viewed counterparts.

The Ordinary – Most Popular Skincare Brand in the U.S on TikTok, by Follower Count

The Global State of Digital in July 2022 10 Celebrities Who Pollute the Environment the Most

The Ultimate Guide to TikTok for B2B Marketing